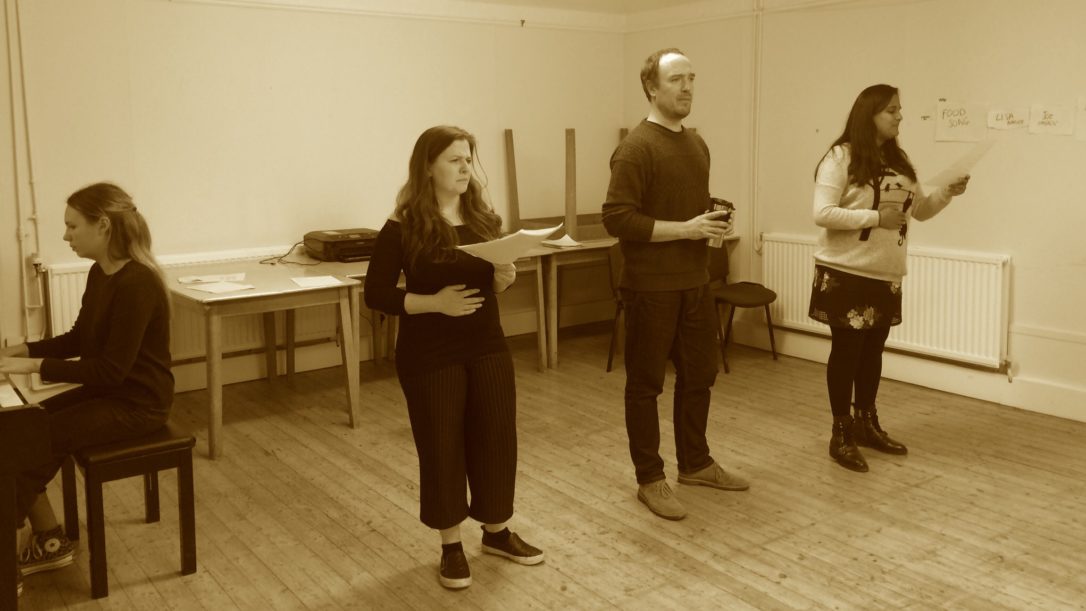 This article discusses the use of theatre as a creative approach to research on Food poverty in the UK. Three million people in the uk are undernourished – an enduring injustice in one of the wealthiest countries in the world. Food bank usage has been continually going up in the last ten years. Food bank usage and the government’s new Universal Credit benefits system are correlated – as the state withdraws from supporting a robust welfare state, food bank usage grows higher and feeding hungry people becomes a matter of charity rather than state responsibility.

But what is the human story behind these injustices? How can we raise consciousness and create change? In other words, how does one communicate this information in a meaningful and impactful way?

A creative approach, such as theatre, can express the human story behind food poverty in ways that a social science or policy report is not able to. It can transmit information in a way that people can relate to, connect with, and hopefully, feel moved by enough to demand change. With this in mind, Strike a Light Production developed an interactive theatre production on food poverty in the UK.

The production team consisted of a director, a playwright, a musician, three actors and a researcher. We gathered at Hawkwood Residential Centre for five days with the aim of developing, producing, and, on the final day, performing the play to an audience.

Theatre can take many forms, from community to musical to forum to drama. Ours was an immersive production, allowing the participation of audience members. It was also collaborative, drawing upon the perspectives of the actors and taking research material into consideration. We also used music and song, in order to transmit facts and figures that could not have emerged organically from character dialogue.

As the researcher in the group, I facilitated focused participatory discussions on the drivers and wider social dimensions of food poverty, in order to add layers of perspectives to the play. After the performance, I also facilitated a discussion with the audience on food poverty and explored ways to tackle it.

On day one, we started broadly and ambitiously, talking about the history of colonialism, and how famines emerged during this period. Historically, hunger is linked to the interplay between racism, politics and power. Today, approximately one billion people go hungry around the world, and they are almost entirely from the global south and, historically speaking, former colonies of European countries. In this light, it is reasonable to speculate that the legacy of colonialism is tied up to contemporary global hunger. 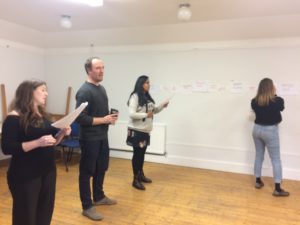 Our conversations flowed, and we focused our attention on the fact that women face hunger more than men, which led to an exploration of the link between patriarchal structures and hunger. We deepened our analysis further by exploring whether food security could be achieved by increasing food production or by ensuring equitable distribution. We also examined ways of obtaining food security that did not pollute the planet and oppress small and marginal farming communities, and this took us to the topics of agroecology and food sovereignty.

Closer to home, we explored how the politics of austerity and the changes to the welfare system in the UK with the introduction of Universal Credit correlates with recent increases in food bank use. Politics and hunger are deeply interconnected in the UK too. We reviewed reports, showing a 5-6 week wait period for income following a move from the old welfare provision to Universal Credit; the policy literature describes this wait as an ‘income shock’.  This shock, induced by the move to Universal Credit, or other waiting periods for income through welfare sanctions, forces some people to the food banks. This informed the songs in the play.

We also discussed the important question of who uses food banks. Single men, and single mothers were amongst the highest users of food banks. Whilst the narrative of patriarchy is absent from the policy literature, we foregrounded it.

We discussed the elephant in the room: class, and the deplorable bias in the media, reflected in the reporting of food bank users, and welfare more generally, where working class communities are demonised and defined as the ‘problem’.

The racism that migrants face surfaced too – 3% of food bank users describe themselves as asylum seekers, and only 0.1% of households in Britain are made up of asylum seekers, suggesting a highly disproportionate situation.

We calculated how difficult it would be to live on £37.75 a week, the amount provided by the state to asylum seekers, and concluded how vital food banks are. These realities show how current welfare provision is insufficient for living a dignified life, and suggests that legislation could be one of many ways to guard against food poverty in the UK. For example, the right to foods is protected under international human rights and humanitarian law (https://www.fian.org/what-we-do/issues/right-to-food/). In the UK (England and Wales, Northern Ireland, and Scotland) a change in law is required to ensure that the state respect, protect, and fulfil the right to food for its citizens, and thus ensure that no one experiences hunger (http://www.bristol.ac.uk/policybristol/policy-briefings/right-to-food/).

However, the UK does not have right to foods legislation, and given the steady quiet erosion of the welfare provision in the UK, food banks have become a vital safety net. The charity of food banks points to the humane values in society, and how people donate with time and resources to ensure vital provisions. We visited a food bank and met the manager. She was an inspiration. Driven by her Christian values, she passionately wanted nobody to go hungry. Whilst we were inspired, and admired her, we could not push away the broader politics of food banks, which for us, was about the state, welfare, being sufficient enough to allow everyone in this country to afford food, and live well. Charity is important, it can add value within society but it is deeply problematic when it replaces the duties of state. However at the same time, we understood the moral compulsion that cries that no one should go hungry, and the charity of such groups becomes vital and necessary safety net.

We also heard the views of a food bank user and discussed the complex reasons why she had to access them. The challenging discussion we had and the visit to the food bank soaked into our bones, and the play emerged from it. The actors and writers played with these ideas and made drama with and from it. The characters emerged alongside the ideas.

The playwright created a story that connected the condition of inequality through the lives of two sisters. One sister had ‘made it’, becoming rich and successful, while the other was a poor single mother on a zero-hour contract. She was subject to income shock, a reason often cited by food bank users. The drama here was to bring out the tension that women can be successful but patriarchy in the capitalist labour market leaves many women with children vulnerable to income shocks. A farmer was also part of the play, struggling to grow food and make a living, depicting how the food system is broken, suggesting welfare reform will reduce food bank use and hunger, but not fix the food system, so food security as an object in itself is precarious.

The play was performed to an audience of around 15 women and men from Glousterishere.  I facilitated a lively discussion with them. The audience showed their indignation that food banks exist, and importantly, were adamant to challenge hunger in the UK. We discussed the need for a right to food legislation which in turn could provide a legal guarantee against hunger. We felt that this would help hold government accountable and make politicians think twice before they slash welfare budgets.

We now hope that we can find funding to develop the play further and tour, building momentum to tackle food poverty in the UK. The process of making a play was simultaneously an inquiry into food poverty and a mode of knolwege exchange and communication. This inquiry process has been an experiment in co-production between theatre makers and researchers. And unlike research reports, the drama gripped the audience, and highlighted the importance of coproduction and mobilising knowledge through creative ways of learning and knowing. It is appalling that people are going hungry and we must use all means at our disposal to advance the idea of the right to food in the UK. We hope that this play is a step towards doing so. 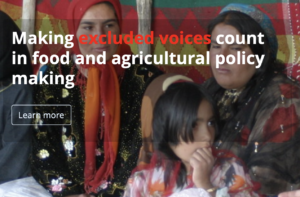